How I Became An Ambassador Of Belize

Late last year I did a little bit of international traveling.  It’s the first time I had traveled outside of the United States because a long time ago I made a deal with myself that I wouldn’t leave the U.S. until I visited and experienced all 50 states.  Sometimes I make stupid deals with myself that I am way too stubborn to ever break.  This was one of them.  So, after accomplishing that earlier in the year, it was time to start seeing what the rest of the world had to offer.  And in those travels, I became an official ambassador to the country of Belize.  How did this happen you ask?  I’m about tot tell you. 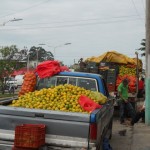 During a little ramble through part of Central America, the Special Lady Friend and I went to Belize.  And it was AWESOME!  We did tons of things there, and one of those things was spending a day or two in Belize City, the capital of that great country.  One of the most interesting things about Belize is that is a former British colony and thus, the national language is English.  This made it quite easy for us gringos to talk to the locals and learn a thing or two about the history and such.

One morning, we were out and about looking for a place to get a decent cup of coffee when we encountered a man with a bucket.  Now, we’d only been in Central America for a few days, but we’d already learned that anytime any of the locals came up and tried to “help” you with directions or something, they were really just trying to extract some money from your pockets.  This particular man asked us where we were going.  We said we were just getting coffee up the street and we did not need assistance.  He said that place sucked and he would show us a better place.  “Just follow me!”, he says.  So, he got us.  We were trapped, and I was already reaching for some spare change in my pockets.

But this man was like none of the other “helpers”.  His name was Prince Charles Perry, and he immediately went into a long and informative speech about how much he loved Belize and how great it was when people visited his great country.  He explained the reason for the English speaking.  He told us about how most of the country is undeveloped rain forest filled with adventures.  He told us about the history and the culture of the people.  He told us the origin of the country’s name and of the country’s only beer.  He told us so much stuff.  You may be thinking, “How far was that coffee shop?”  Remember the bucket?  He just sat himself down and went into his lecture.  He claimed to be a former history professor at the local university.  And he very well might have been. 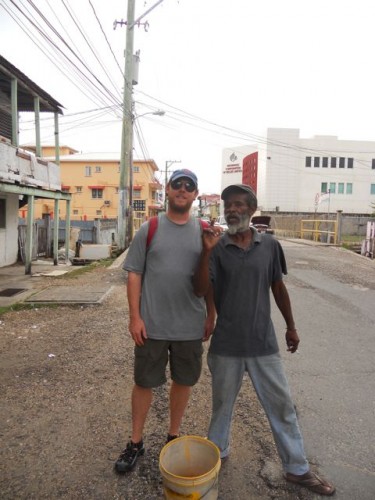 Me and Prince Charles Perry

Overall it went on a bit too long and he was moderately annoying.  But it was so much better than some guy walking us down the block and holding out his hand, which happened quite often.  At the end of it all he made us each stand in front of him and he anointed us official ambassadors of travel to the country of Belize.  That’s going on my resume.