Waaaaaaay back in the fall of 1995 I decided I wanted to learn how to play the guitar.  One day that fall, before I had even learned 4 chords, I was sitting in my high school study hall and talking to my acquaintance Marcus about music.  Before I knew it, he was inviting me to join “his band”.  Sounded fun to me.  Soon after, I got together with a rag tag group of guys and we played some music.  Here was the original line up:

We practiced in Flea’s bedroom at his parents’ house that first fall.  All five of us would cram into the little space and play Bob Dylan and Grateful Dead tunes until the balmy room, made humid and nasty from our rocking out so hard, became too much to handle and we’d take a break outside and talk about how awesome we were.  Which of course, we weren’t.  It’s hard to be too good when your rhythm guitarist doesn’t really know very many chords and one of your percussionists plays drums on an old Casio keyboard.  It also had other noises which we occasionally “jammed” with.  Like dog barks. 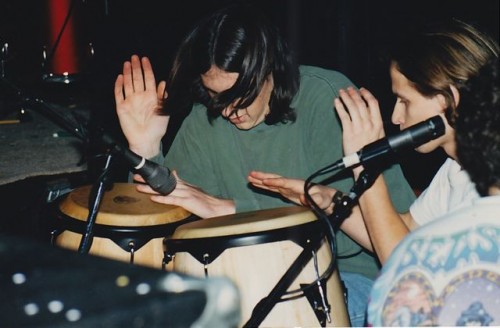 As the fall moved forward, it became pretty obvious to us that there were not enough people in the band.  So we added a bass player (Piccinino).  It was ridiculous that we only had two percussionists, so we found another one (Dave on congas).  Aaaand another one on top of that (Laureano on kit).  And Marcus’ girlfriend (Kate) wanted to get in on the fun, so we fell into the mold of having a cute girl play tambourine and dance on stage.  That brought the total number of band members to NINE!  Ridiculous right?  And we also had an honorary member (Nort) who would sometimes sit in to play the meanest maraca you’ve ever heard.   The next couple of months we crafted a handful of original songs to go with our strong catalog of Dylan, Dead and various other covers.  We were ready to bring our noise to the public.  We called ourselves Cassiopeia.  That name was not inspired by our drum machine.  By this time, all percussionists played actual drums.  Honest.  BUT, we soon found out that there was already a band out there by that name so we had to scrap it and find another one.  So we settled on Liquid Caravan.  How high school stoner is that, right?  And also, how freaking awesome, right?!?! 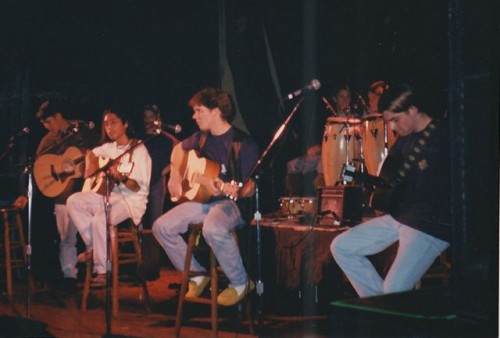 There was a suburban nightclub near Flea’s house that had a “high school night” around once a month so teenagers would have cool things to do.  Or at least different things to do.  ‘Cause playing ping pong was also cool.  So was hanging out at Burke Lake in the middle of the night.  Anyway, we got on the bill for one of these high school nights.  We practiced a ton and got the set list together for what promised to be the highlight of our lives.  Live at Jaxx:  Liquid Caravan.  Hell yes.  The night of the show came and we were all pretty excited/nervous.  During set up, it was obvious that the sound guy was not at all happy.  Nine freakin’ members?  Four percussionists to mic up?  He hated us.  But he seemed to do a good job and made us sound as good as he could.  Then we played and the people danced and the band danced and it was really a moment that I will remember for a long time.  And it was only the beginning of the bands’ and my own musical journey. 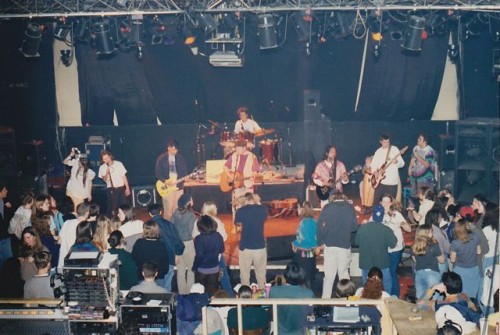 I sometimes ruminate about how things would have been different had I not been invited to join a band before I even knew how to play an instrument.  I’m sure my father wonders that every time he sees me.  But I’m pretty darn happy with the route that has come of it.  Thanks Marcus.