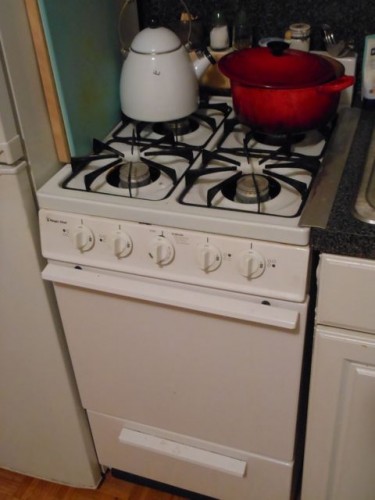 Not that kind of gas… I’m talking about the gas that magically turns into fire on our stove and allows me and the Special Lady Friend to cook various items to eat.  About a month ago I returned to our modest little apartment in Brooklyn to a note on the door stating that there had been some serious issues with the gas line running into the building and they were going to have to temporarily turn off the service for 2-4 weeks.  Now, that’s a long time.  That’s longer than the Olympics.  And we all know that the Olympics seem to go on forever.

So we had a meeting and decided to make the best of things.  We were going to create food items that we had never thought of before and really try to enjoy this inconvenience.  Turn it into an in-inconvenience.  And what did we eat for almost three straight weeks?  Sandwiches.  Lots and lots of sandwiches.  It’s a good thing I love sandwiches and can eat them for almost every meal, because that is pretty much what happened.  But recently we have grown tired of sandwiches, pita pockets and wraps, and have finally started having a little more fun with the situation.

First off, the Special Lady Friend went out and got us a pitcher that boils water when you plug it into the wall.  That’s some sort of magic.  Or science.  Which Vonnegut so eloquently called magic that works.  We have been boiling eggs in it and pouring boiling water over vegetables to give them a quick (very quick) cook.  It’s nice.

Then I spoke with the webmonkey (the guy who has created our super awesome website and helps manage it with his expertise with a typewriter…and lives a short walk away from me) and he lent us a rice cooker.  Did you know that a rice cooker can cook more than just rice?  It’s true.  Believe the rumors!  We can steam veggies in it.  And cook bulgur and quinoa.  And of course, rice.  White rice.  Brown rice.  Really, you can cook any kind of rice in it that you can think of.  It’s been great.  I never know a rice cooker could be so versatile.  Our meals have gone from sandwiches to steamed broccoli and carrots on a bed of rice.  Or rice and scallions with sweet potatoes, carrot slaw, spicy tofu and salad.  Delicious!

And just when you thought things were looking up, we got a new letter on the door saying that the replacement of the gas lines is not going well and they are getting rid of our gas stove, replacing it with an electric one.  It doesn’t really say when this is gonna happen, so we’re not holding our breath.  And it kinda sucks cooking on an electric stove.  Maybe we’ll just stick to the new system.  Who wants some kinda cooked sweet potatoes?