Hi all.  So we’re gearing up for our trip to the midwest next week.  Very excited to play a bunch of towns that we’ve never been to before.  But in the meantime, nothing is going on until August 10th.  That’s a long time.  That’s 8 more days (depending on when you read this update.  Although I’m sure most of you come to the site every day.  RIGHT?!?!)  So this here update is here to distract from the nothingness that is going on.

I have decided to distract you with some old and fun pictures and then tell you about them: 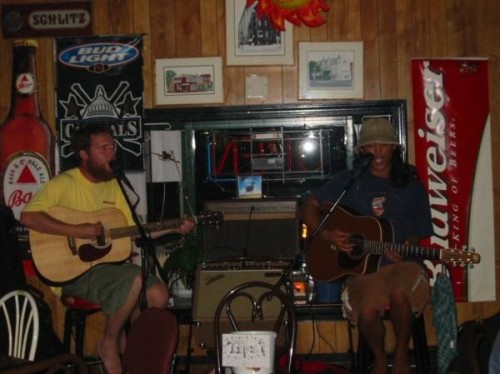 Ahhh… Good Ol’ Joe’s.  I can’t really tell you the exact date of this picture, but my guess is ’05.  This is back before Herb & Hanson decided that playing music was what we wanted to do.  We just ran an open mic and played a show here and there at local northern Virginia venues.  This one is from Joe’s in Arlington.  Hanson also used to be a short order cook there.  And we played through amps.  And apparently didn’t wear shoes.  Good times. 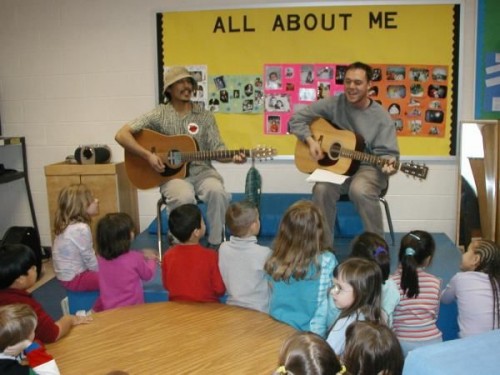 You know, for kids!  Herb’s sister used to work for an after school child care program in Virginia and one day asked if we would come in and sing some songs for the children.  It was pretty fun singing songs like Hot Corn, Cold Corn and This Land Is Your Land for the little guys. 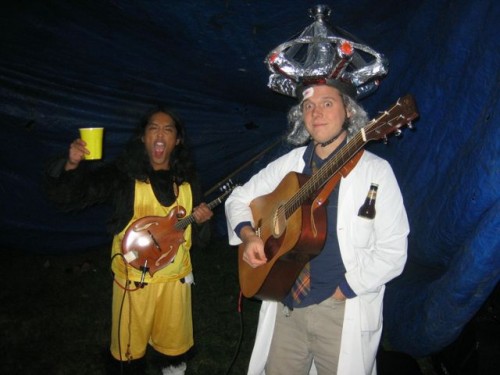 This is from Hanson’s brothers’ wedding day.  Just kidding.  It’s from the annual Halloween party that we all attend near Shepherdstown, WV.  This particular year was extra cold, as evidenced by Hanson having his hand down his pants.  If you hate awesome movies and awesomer halloween costumes, I should tell you that Herb is Teen Wolf and Hanson is Doc Brown from Back To The Future.

Dylan Day.  What we have here is Herb & Hanson yet again being the first people in line for a general admission Bob Dylan show. This one was at American University in the DC, and to make sure we were first in line, we showed up the night before and slept on the floor of a hallway.  We went outside to where the real line was to form in the AM.  I think the next people to get in line didn’t show up until around noon or something.  Suckers.  We’d already been there for like 14 hours by then.  And you call yourselves Dylan fans?

That’s enough to distract you for now.  Don’t forget to check out the show schedule because we have a lot of shows coming up in a lot of different places.  Chances are we are gonna be close to where you live sometime in the next three months.  See ya there!