Some people like Christmas.  Some like Thanksgiving.  Some like the 4th of July.  No one really cares about Columbus Day.  And that’s ok because Columbus was kind of a dick.  All those holidays pale in comparison to the greatest day of all, Halloween.  Halloween is quite simply the best of the best.  The weather has cooled down.  You get to pick and carve pumpkins.  Eat pumpkins in various forms.  Drink pumpkin beer.  Dress up like a pumpkin.  Pumpkins rule!  And of course, you get to hang out with your best friends and celebrate the day.  For the last ten years or so we have gone to a great get together near Shepherdstown, WV.  And here, I am going to give you a history through pictures of most of my costumes.  Let’s get right to it: 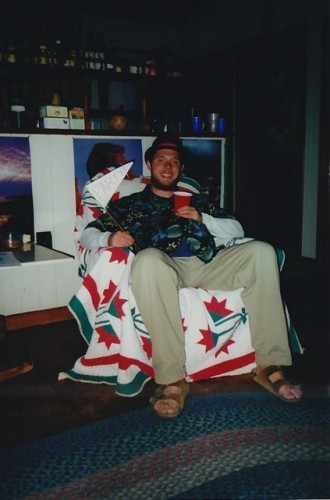 The first year I dressed up at the party I went as a “Big Fat Party Animal”.  Pretty lame costume, so let’s just keep moving on. 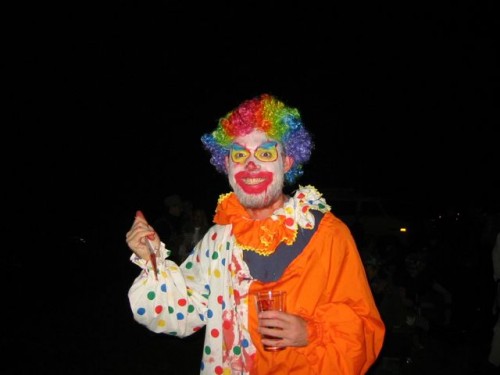 This is my Killer Clown costume.  That’s a knife in my right hand.  And a beer in my left.  Many of these pictures feature me holding beer.  Anyway, one of the funny things about this costume is that after I put it on and got all made up and such, the host of the party informed me that another guest, his best friend, was terrified of clowns.  I felt terrible and tried my hardest to stay away from him the entire evening.  Sorry Charlie. 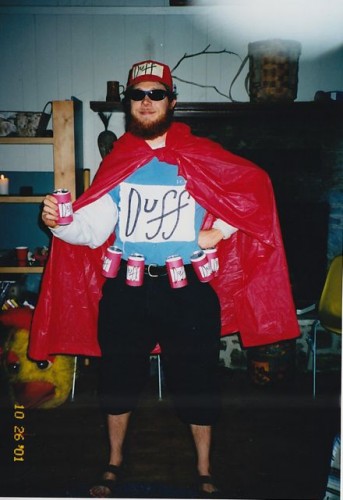 Duff Man.  Ooooh yeeeah!!!  For the unknowing, Duff Man is a character on The Simpsons.  He is spokesperson for Duff Beer.  I made the belt, shirt and cap myself.  The cape is a poncho.  This one may be my favorite costume.  It’s the first year I started being in character for the evening.  And it was awesome. 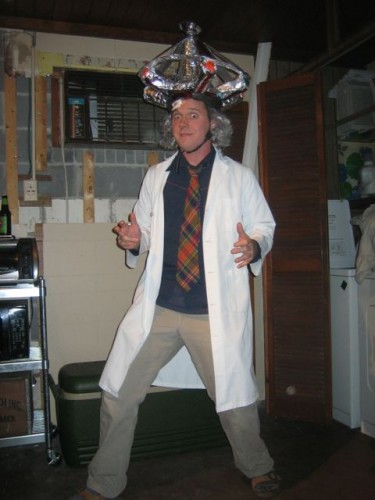 1.21 gigawatts!!!  This is me as Doc Brown from the popular movie series Back To The Future.  Some of my favorite movies EVER!  I created the headgear using a bike helmet and coat hangers and a ton of tin foil.  I also carried around a drawing of the flux capacitor all night and tried to explain the theory of time travel to people. 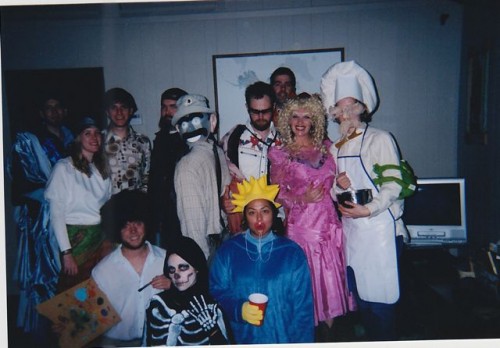 I couldn’t find a solo shot of me this year, so here is a group shot.  I’m Bob Ross.  The famous painter.  Other notable costumes in the shot are Herb right in the middle there. He’s backwards.  That was his costume.  Backwards.  Hannah was Maggie Simpson.  And T-Peg is hiding in the back.  He was a Star Trek person.  (What a terrible scan job.  Sorry for the crookedness of this shot.) 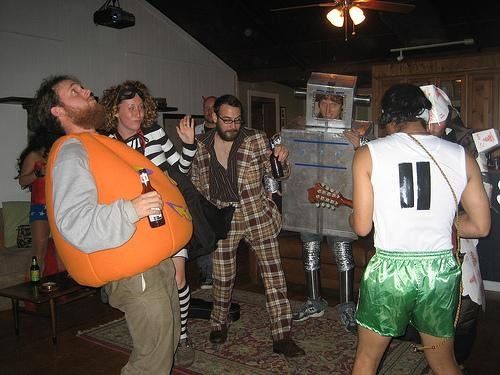 Another group shot.  This seems to be during the dance party portion of the evening.  I borrowed this outfit from my mom.  She wears it every Halloween.  I’m glad I didn’t ruin it.  I started out as just a pumpkin.  But at midnight I transformed into a Drunkin’ Pumpkin’.  Another Halloween Miracle!  Please note my brother Pete there in the robot costume.  Every year Pete had THE BEST costume EVER!  No lie.  That guy is my personal king of Halloween. 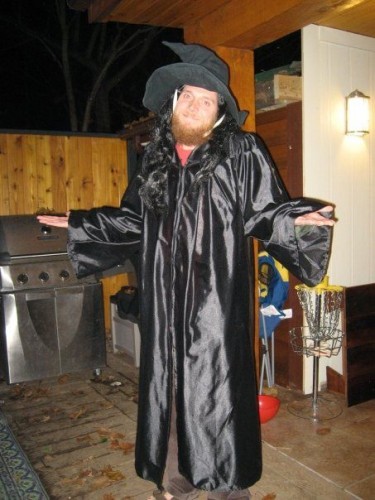 Ya know, sometimes life just gets in the way of the important things like making your halloween costume.  And that’s what happened this year when I was a witch.  It’s a classic, but with no makeup and a big ol’ beard, I was pretty disappointed in myself on this one.  Hence the pose. 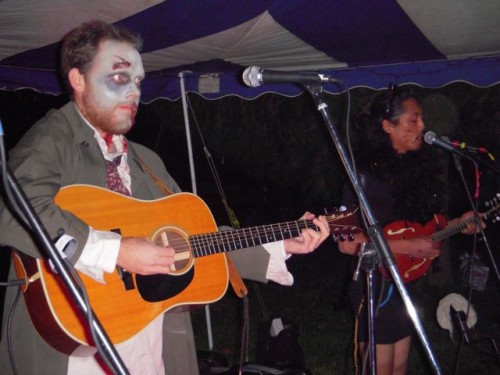 Here is a shot of Herb and I during the part of the party where we play some songs on stage.  I’m a zombie.  And I like it.  I will let you all ask Herb what he was thinking with his costume that year. 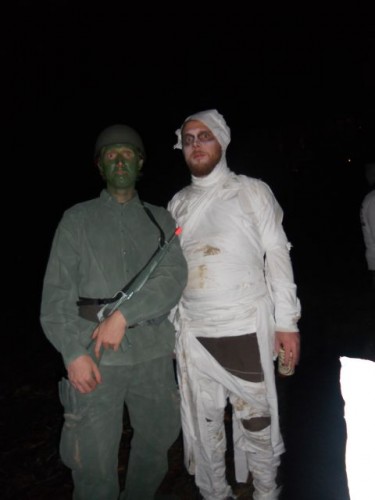 Here I am as a mummy.  Another classic.  And another beer in hand.  But Pete was  a freaking miniature army man guy.  You can’t see his feet, but he’s got the stand and everything.  Damn!  He’s so good at costumes.  We’re gonna miss him at this years party for sure.  California better up their game.

So there are some of the costumes I’ve worn over the years.  The only one I couldn’t find was when I was The Dude from The Big Lebowski.  It was a good one.  I drank white russians all night.  And beer.  Can’t wait to see what everyone is gonna be this year.  I better get crackin’ on my own costume.