At my new top secret temporary permanent residence I have the pleasure of having an enormous back yard. It’s bigger than some of the “parks” I used to go hang out in in Manhattan sometimes. And since it is so big, it has lots of possibilities for awesomeness. This past week, since the warmth seems here to stay, my roommate and I have begun to utilize that awesomeness.

Our first mission was to get chickens. And we did. I went and picked up 6 chickens from a nearby organic farm. I think they’re about 6 or 7 months old, so they are already pretty big. I transported them home in kind of secure boxes, and the whole way home I couldn’t help but imagine an incident where one of them broke free from their temporary confinement and started flying all over the car while I tried to navigate the small country roads. Luckily that only happened in my head. And it was a pretty hilarious situation in there. But in reality, I got back safely and put them in the coop. After a day of being locked up in their new home, we set them free in the yard. Since they almost all look exactly the same, I’m not sure we’re gonna apply names to the small flock. But there’s this one hen that does stand out. She makes the most racket. She follows you around all the time. She repeatedly tries to get on the porch. She tried to escape during the one day lock down. She’s a rebel, for sure. So she has been named Chickie-Chickie-Che. Maybe the rest of ’em will show off their personality in due time and get some names of their own. 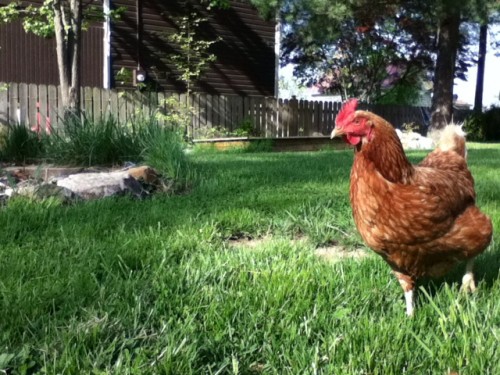 The next morning we went to let them out and what did we find? Our first egg: 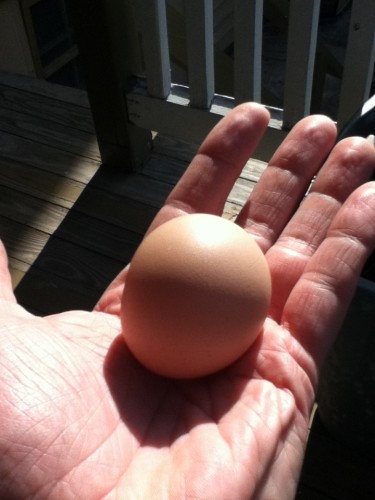 And then there was another one. And then we ate them: 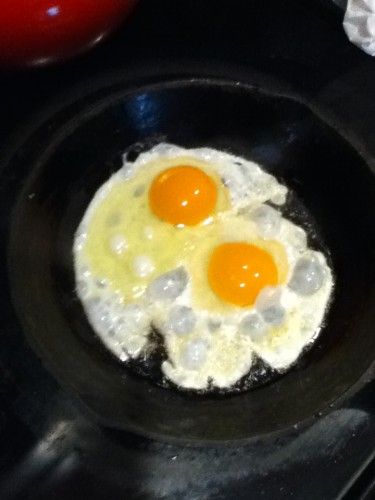 And it was awesome.

Since the chickens were acclimated and producing, we moved on to the next mission. We had a garden party. I’m not talking about those fancy-schmancy garden parties where you get all dolled up and have a string quartet playing while you drink fine wine while showing off your well manicured beds full of flowers and crap. I’m referring to when you have some friends come over and you drink beer all day while pulling weeds and building beds and planting plants for sustenance. And it was a success. As of right now we are growing: 9 types of tomatoes, red, orange, and yellow bell peppers, poblanos, jalepenos, cauliflower, butter lettuce, kale, spinach and two types of basil. Dag! Right? It’s gonna be awesome. I’m gonna get some brocoli going as well. The garden is so big that I couldn’t fit it all in the picture: 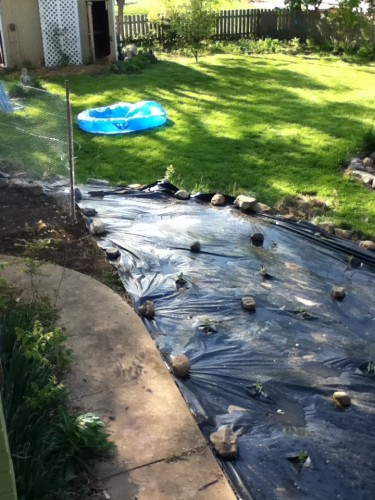 Chickens? Check. Garden? Check. What now? Well, the next project for the back yard is to get some rabbits. We’re not thinking of those cute, cuddly pet type of rabbits though. We’re gonna go with the kind that you get, raise, breed, kill, and then eat. We are going to build a rabbit tractor for them to live in sometime soon. I’ll keep ya posted.

We are definitely on our way to making the backyard a mini farm. I’m for it.