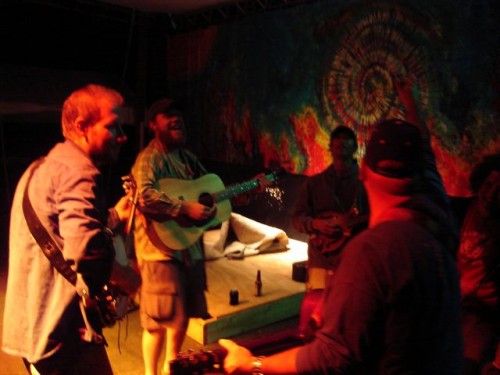 Hey party people!  I keep forgetting to tell you all what’s going on.  Mostly because not much is going on.  But there are some things.  I heard from ol’ Herb (Two Sticks) the other day and he is currently walking somewhere north of Atkins, VA on his continuous journey to the north.  His spirits are high and his adventure has already brought him to amazing places and introduced him to amazing people.  Bookmark his blog page HERE, as he updates it every once and a while to keep all of us informed that he is still alive.  And he just had a birthday, so drop him a line to let him know you were thinking about him.  Even if you weren’t.  He’ll never know.  He can’t read your thoughts.  I think…

And I’m still sitting around in my top-secret-temporary-permanent-residence.  Just chilling on the wrap around front porch reading and writing and watching the chickens run around like idiots.  Chickens be dumb.  I do have a handful of new songs in the works.  So that’s cool.  And Herb is working on some new music too while he’s out there.  He brought his ukulele with him on his walk.  I’m looking forward to the hearing what kinda music comes out of his inspirational journey.

One troubling issue that has arisen is my voice seems to be pretty badly damaged.  I think I have some nodules or polyps on ’em or something.  I can’t hit any higher notes, it’s extra gravelly, and I can’t sustain many notes at all.  It’s like my breath is short for no reason.  This all started near the end of our last run in February and March.  I just chalked it up to my voice being tired and was looking forward to resting it for a bit.  But it’s just not getting any better.  I did an internet self-diagnosis and decided it definitely nodules.  It’s caused by years and years of abusing my voice by singing and screaming into a microphone for hundreds of days per year.  How do you get rid of them?  Well, I’m supposed to stop drinking booze and coffee (two of my very favorite things) for two to three months and go on strict vocal rest.  What’s strict vocal rest you ask?  Well, it means that I’m not supposed to talk or sing at all for a few months.  I’m sure most people won’t complain about the no talking thing.  I don’t have much interesting to say.  So, I’m trying to find a good ear nose and throat doctor to get a real diagnosis and see what I should do.

Here’s a picture of a monkey I hung out with in the rain forest in Belize: 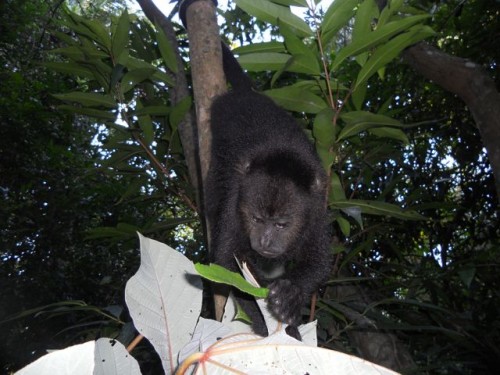