First and foremost, I want to bring up the unfortunate tragedy that occurred during Trail Days. There were no fatalities and since I never attended, I remain unscathed.

For those of you who are unfamiliar with Trail Days, it is an annual celebration of Appalachian Trail hiking. Hikers from all years reunite with old friends here. Gear vendors gather and showcase new strides in their products and fix well-used gear for current hikers so that they may continue with their trips. Hikers take a break from their arduous journeys to rejuvenate themselves and revisit fellow hikers they haven’t seen in weeks. It’s an all out hiker party, pretty much.

Live music fills the air. A tent city is built. Fires roar. Food is consumed in epic proportions. And everyone has an incredible time. There is even a parade featuring thru-hikers not only from the current year, but from years past.

But, this year, something ugly happened during he parade.

The official press release is that someone behind the wheel of an automobile had a medical condition that caused him to uncontrollably run over hikers walking in the parade. It has been tough to get much information about this. Needless to say, this incident put a damper on the festivities. People were hurt, for sure. But, at least nobody died.

On a brighter note, I would like to relay to you all one of the most amazing things that has happened to me so far on this walk. The views are always great, the walking has me feeling great, and this whole experience has been the most incredible thing in my life insofar. But, let me tell you about a specific spectacular happenstance.

As you may, or may not know, hiking the trail will lead to meeting a ton of people – mainly other thru-hikers. Also, hiking the trail means that you will separate from these new friends fairly constantly as different hikers walk a different pace. Sometimes, you don’t see your friends for weeks.

I was 4 days out of Damascus, VA when I came upon the Partnership Shelter and I ran into a slew of folk I hadn’t seen in such a long time….and the food was cooking.

A small toy football was being tossed. A hackey-sack was being hacked. Whiskey was being passed around. Beer was being consumed. And the food was cooking.

We were in he middle of the woods and some of these hikers took a trip into town to pick up party supplies.

Burgers were being pattied. Fresh caught pond fish was being cleaned. A hobo stew of ground beef, celery, carrots, onions, and potatoes was simmering over an open fire.

I was reunited with pals I hadn’t seen since the Smokies. Hell! Since even before the Smokies. And we were playing games and having a drink and the food was cooking.

We feasted that night. And we sang songs on the ukulele I’d been lugging around. We cooked hot dogs over the fire. Smores, Smores, Smores! And there was late night cake and cream soda. And things could not have been more perfect.

For many reasons, I love the Trail. For this specific moment, I owe the Trail something I cannot hope to repay – magic. It just doesn’t exist; except here, sometimes. 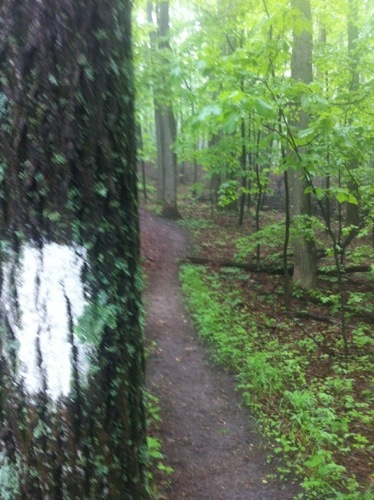