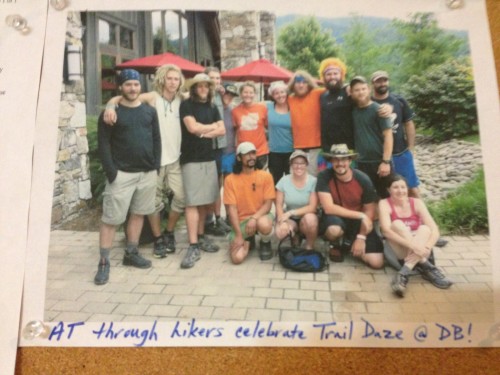 Hi all.  Long time no see.  The above picture was sent to me by a friend who was at Devils Backbone Brewery near Waynesboro, VA.  He was in the bathroom and spotted a picture of Herb on the wall.  Apparently Herb could not resist the temptation of a brewery so close to The Trail.  Sounds like Herb.

Last week I picked him up off the trail so he could visit with his family for a couple of days.  He’s looking good.  Lost a little weight, but looking none the worse for wear.  His spirits seem high and he’s having an amazing time living in the woods and carrying all his worldly possessions on his back.  He’s also looking forward to telling you all some stories.  Cause man, does he have some stories.  I picked him up in the morning and the first thing we did upon returning to my top-secret-temporary-permanent-location was have a beer on the porch.  The second thing we did was play some music.  Also on the porch.  It was fun, but I don’t think it sounded very good.  It’s been about three months since Herb last played his mando.  He even forgot a how to play some chords.  It was hilarious.  Here’s a video of one of the songs we picked on.  It’s labeled as “Prostitutes”, but is actually called “Blood In My Eyes”.  It’s an old Mississippi Sheiks song.  You’ll see that I forgot a few things as well.

But fear not!  Upon his successful return from his journey, we’re gonna lock ourselves in a room full of instruments and beer and play music for three weeks non-stop to regain all of the awesome power of Acoustic Destruction that you all know and love.  And then we are gonna hit the road and satisfy your craving for those sweet, sweet jams that you’ve been missing.  It’s gonna be awesome.  Promise.