I surpassed the 1,000 mile marker today near Bluemont, VA. There was a colorful post with “1,000” painted on it to mark the spot on the Trail. I thought about taking a picture of it, but it was raining pretty hard and I decided against it. A few yards from the 1,000-post was a noisemaker laying atop a fallen tree. Against better judgement, I picked it up and gave it a blow – I figured I deserved some sort of fanfare to celebrate this milestone. Alas, no noise was produced by the noisemaker as it was too soggy and wet from the aforementioned rain. I wondered what other hiker might’ve tried this noisemaker before me. And then I wondered if I’d get the Norovirus again.

I’m on my second pair of shoes. The first pair took me 900 miles before a rock gashed the left shoe exposing my foot and sock to the record-breaking rains and making for some uncomfortable walking. Many of the other thru-hikers were surprised I was able to get 900 miles out of them. It seems that most have switched to new pairs between 500 and 700 miles. I hope these new shoes will take me all the way to Katahdin. I can’t really afford another pair.

These last coupla weeks have me walking as close to home as I’m going to get on this trip and it has been a blast! The envy I felt down south as other hikers were receiving visits from family and friends melts away when I finally get my visits! The walking’s been pretty slow because of these visits, but I ain’t complaining.

A buddy of mine came onto the Trail to walk 20 miles with me. When we arrived at the shelter where we were going to spend the night, he pulls out a 12-pack of beer, a pint of bourbon, and 2 NY strip steaks. Bam! Instant hiker party! Now that was some Trail Angel Trail Magic.

The following morning as we were packing up to start a full day’s walk, I asked him if he brought any other food to eat throughout the day. He said “nope”. Ha! Awesome. It was okay. We just ate food out of my food bag.

Tomorrow I will be leaving my home state of Virginia and will be crossing into West Virginia. (I’ll be stepping into Virginia again, but just very, very briefly around the confluence near Harper’s Ferry where I’ll set foot in 3 states over the span of 3 minutes. This may be slightly exaggerated). I’ve spent over 6 weeks hiking the 500-plus miles of Trail through Virginia and though it makes me kinda sad to leave this spectacular Mother-State, I am excited to once again cross into yet another state on the Appalachian Trail. It’s gonna be sweet!

Before I go and end this little update, let me tell you about my Shenandoah National Park experience.

For those of you who don’t know, the Appalachian Trail traverses the length of the Shenandoah National Park for about 100 miles. It had been many, many years since I’d visited this beautiful park so very close to my home. I didn’t even know that they served beer and alcohol throughout the park at the various camp-stores, restaurants, and waysides. Enlightened with this information before I entered the park, I took it upon myself to attempt the “Shenandoah Park Daily Brew Challenge”. Yes, it is exactly as it sounds.

For the 6 days I spent walking through this wonderful National Park, I was pretty lit.

Here’s a picture from the top of Black Rock in the Park: 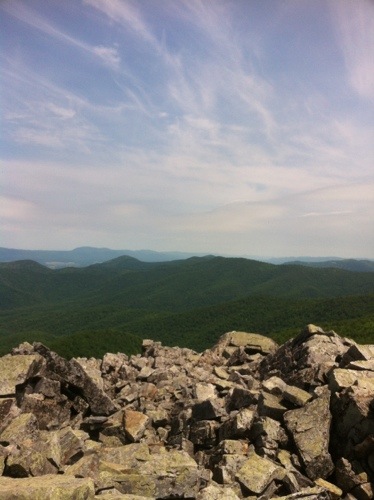