The Heat is On!

In the words of Bob Dylan: “…hotter than a crotch”.

Sorry, it’s just been so darn hot these last 3 weeks that I’m surprised I’m still able to walk 12-20 miles a day. And to boot, good water sources have been a bit scarce lately. No need for worries. I’m not gonna die of thirst on the trail. I only mean that water sources along the trail are no longer as conveniently located as they were in the south.

A liter of water is approximately 2.25lbs. My lazy ass doesn’t usually carry more than 1 and 1/2 liters at a time because I just don’t wanna carry it. Lately, I find myself drinking 2 liters at a source and then walking with almost 3 liters on my back. Yeesh!

I spent 5 days walking through New Jersey. Let me tell you about 3 of them:

I munched on mulberries on the way out of the woods to get me to a road that was going to take me to a bar in Branchville for some cold drinks and a cheeseburger. I ordered an extra sandwich to pack out with me, but it didn’t stand a chance of leaving the establishment pre-consumed; I don’t know who I was fooling with that plan. After a few beers on the lake in town, a bunch of us hikers decided to climb the next mountain.

Atop this mountain was the Culver fire tower which we climbed to enjoy the sunset and breeze after a very hot day of walking and beer drinking. Soon after the sun went down, we spotted a glowing spire in the distance atop another mountain. We all wondered what it could be and were left befuddled as we set up camp and went to bed.

The following morning most of us set out for High Point State Park because we heard there was a lake that we could go swimming in to beat some of this heat. We hiked the 14 miles to this swimming hole eating blueberries off the bushes along the way and to our surprise found that it was adjacent to the spire we were contemplating the night prior! It turns out that the spire is the State Park’s obelisk signifying the highest point of the state. Mystery solved!

The very next day found us hiking through wildlife refuges and marshlands before heading into the climb of Pochuck mountain. This climb was so very difficult with its steepness and rock-climbing and the summer’s heat. But the view was totally worth it: we could see the High Point spire yet again. 3 days in a row!

Last night I crossed into New York leaving New Jersey behind me for the final time on this trip. And like I said, it made me kinda sad. But, it’s all good. Today was pretty incredible too.

I climbed down from Prospect Rock after camping for the night and checked out Fitzgerald Falls before climbing Mombasha High Point and Buchanan Mountain. I’m currently camped by a pond in a pine forest listening to crickets, watching fireflies, and wondering if it’ll be worth it to take my food down from the tree for a late snack. Maybe I should just go to bed….nah!

I hope everyone else’s summer is just as enjoyable as mine. I miss you guys and can’t wait to sing songs for you all again. It’ll be soon, I promise. I just gotta walk through a few more states…

This is one of my new favorite places: Sunfish Pond, Worthington State Park, NJ. 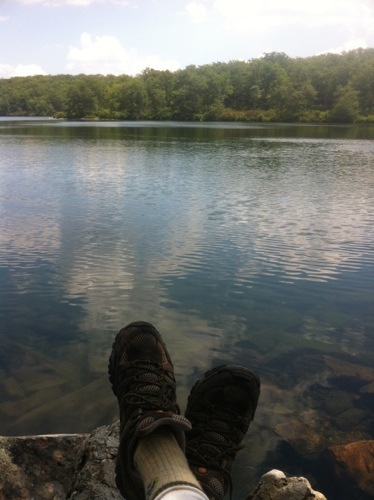