It was just a few days ago as we were driving up interstate 81 on our way back from slinging songs on the Left Coast when Summer sent me a reminder that it was here.

Ol’ Hanson kept thinking he was seeing the glowing eyes of deer on the side of the road, clutching the steering wheel with intent ready to go into evasive action should one of them decide to mosey out onto the highway. Upon closer inspection we were both relieved when it was deduced that the glowing lights were not, in fact, coming from these unpredictable hoofed creatures. They were coming from fireflies – boatloads more predictable.

For those of us fortunate enough to grow up in and around this part of the world, the return of the fireflies has long been a strong symbolic sign of Summer (redundant, I know; but the alliteration was too tempting to pass up). I always forget about them. And it’s not because I don’t appreciate them, although I’ll admit that I may take them for granted. But, for some reason, there are other things in the foreground of Summer that somehow overshadow the firefly magic.

I tend to look forward to Summer for many reasons: the Solstice, cicadas, BBQ season, the 4th of July, the bajillion August birthdays in my family. But never the fireflies.

I feel as if I’ve somehow been able to repress my memories of these lightning bugs all year long only to have them surprise me upon their return time and time again. It’s kinda fun. It’s almost…almost like seeing them for the first time even though I’ve lived my share of Summers.

I met a girl from Germany last year and we set up camp near a field somewhere in Pennsylvania. My quiet contemplation of the fireflies backdropped by the ever darkening dusk was pleasantly disrupted by the “oohs” and “aahs” coming from this fellow camper just a few yards away from me.

“I’ve never seen them before coming to the States!” There was magic in her eyes – the yellow green reflection of these glowing, flying beetles.

“Really?! Never!?” As my vicarious excitement grew, I was remembering the innocent revelry I must have felt when I first encountered these creatures.

“I’ve only read about them in books!”

“Do you know why they light up?”

“They’re trying to have sex.”

(There goes that “innocent revelry”.)

I then proceeded to exhibit my deft hunting skills as I disappeared into the evening only to return with cupped hands pulsating illuminance with an alien-like heartbeat.

It turns out that this girl from Germany was a natural firefly hunter. 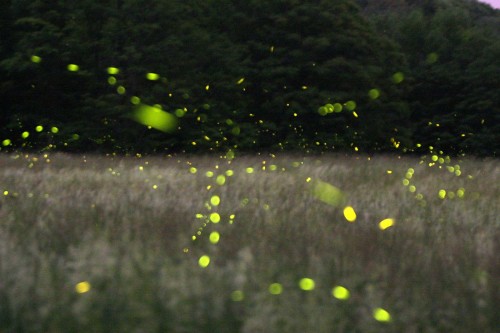