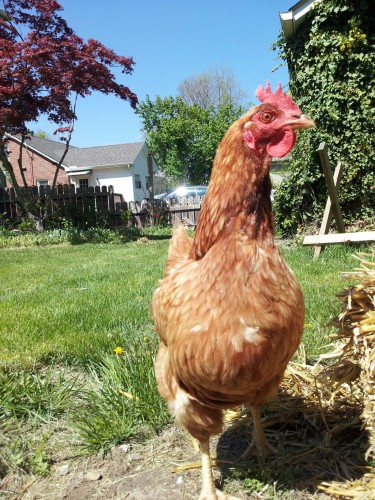 Sad news to report.  I had to kill one of my chickens.

As I told you all a few months ago, I went and got 6 chickens for the back yard.  They have been a great pleasure to watch run around the yard, eating bugs, being all dumb, as chickens are prone to do.  I love watching them freak out in a state of pure bliss when I give them food scraps like rice and kale.  Those chickens LOVE people food.  They know I am the bringer of treats, so when I exit the house, they come running from where ever they are in the yard.  It always reminds me of dinosaurs when the chickens come running at me.  Like I am a giant that lives in Jurassic Park.  They are super fun for the most part.

But a couple weeks back, I noticed that one of the chickens was doing this weird thing with its head, moving it violently side to side, instead of the traditional chicken head moves of front and back.  After a few days of observation and some internet researching, it was decided that the chicken most likely had an impacted crop.  What the heck is that, you ask?  Well, the crop of a chicken is a sack just below its esophagus that swells when the chicken eats.  Sometimes, especially when the chicken eats too much green outdoor roughage, the crop can get blocked.  When this happens, the food has a trouble getting to the rest of the digestive system and a bulge develops.

Over the next few days we noticed a bulge developing above the breast of the bird.  This pretty much confirmed my diagnosis.  What now?  After asking around and reading a lot about it, we tried to fix it ourselves.  To do this we held the bird by the feet and massaged the sack that had formed, forcing the chicken to vomit out all the stuff that had been there.  It was pretty nasty.  Especially since all those other super dumb chickens were at our feet eating all the vomit.  We tried our best but were unable to fix the chicken.  After a couple more weeks it was pretty obvious that the chicken was uncomfortable and in pain.  The decision was made to put her out of her misery.

So yesterday, Crissy grabbed the axe, I held Ol’ Yellow Foot down on the stump, and her head was chopped off.  It was kind of traumatizing.  There are no pictures of the execution.  And you know that old saying “A chicken with its head cut off”?  Well, I finally have experienced it in real life.  It didn’t actually run, because I was holding the body down.  But man!  There was a good 2 or 3 minutes of that chicken flapping it’s wings and trying to run.  It freaked me out.